What is the Shoe Game?

The shoe game is a favorite game to play during wedding receptions.  The rules are simple, but it's a fun way for your guests to get to know your spouse, plus it serves as a great break from dancing.  And it's a good way to engage your guests and direct their attention back to the dance floor.

This is something that we'd usually schedule on your timeline, and we'd make an announcement that in for instance, 5 minutes, we'll be playing the shoe game with the bride and groom.

How to play the shoe game?

The rules are simple.  Have two chairs put into the middle of the dance floor, or in front of the head table, or another central location with high visibility on multiple sides.  Then, the bride and groom sit back to back, with one shoe from the bride, and one shoe from the groom in their hands.

At this time, your DJ or MC, or someone else you designate, will begin to read questions to each of you.  Typically, 20-30 questions is sufficient, but you can always add more questions.  It's a fine line between being too short and seeming like you're disrupting the flow of the reception, and being too long.  We'll help you make that determination.  Plus, we can always ask fewer questions then planned.

One a question is asked, the bride and groom will raise the shoe of the person they think is the answer to the question.  For example:

DJ: Who is the better driver?

Bride (thinking that she is), raises her shoe.

Groom (knowing the he is the better driver), raises his shoe.

And so on.  This usually elicits laughs and feel-good moments with your guests.

Ready to talk about your DJ or Live Music needs?   Send us a message and let's chat! 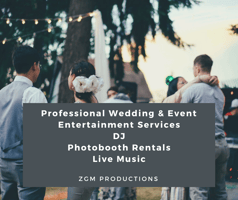 Interested in our DJ services?  Here are some helpful questions and answers to help you get to know... 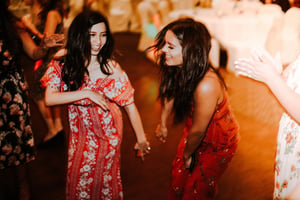 What to do if your guests aren't dancing? 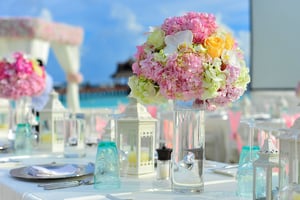 Come see us at the 51st Grand Rapids Bridal Show!